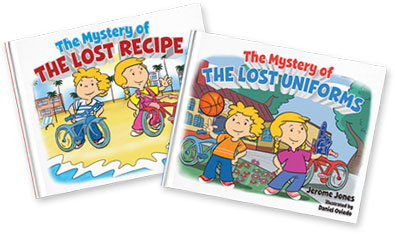 Jerome Jones contacted me recently on writing a review on his children's books The Mystery of The Lost Recipe and The Mystery of the Lost Uniforms. Both books follow Abby and Tommy as they solve mysteries in their hometown Pismo. I was very excited to review these books, but because I am no longer a child, I brought in the real professionals - my younger siblings.
My first sibling to help me out was Sophie, who is eight years old. Weston, the second to help me along in writing this review, is currently six years old.
Here’s what we think of The Lost Recipe:


The Lost Recipe was all three of our favorites of the two. Sophie once exclaimed, “These kids are awesome!” while I was reading. Afterwards, she remarked that it was “fun and interesting.” she also liked that they found the recipe and that Mr. Nut “had a funny name.”
Weston felt the same way. But while he agreed that he liked the book, he had to admit that he didn’t know why he liked it. Except, of course, because of Mr. Nut who had a “funny name.”
Their favorite parts were the pictures, which Sophie liked because they “helped [her] solve the mystery” and Mr. Nut. At the end of the day, I think that we could call these two a Mr. Nut enthusiast.


Sophie was interested in this book as well, but thought that it was a little bit too long. In her opinion, she liked that the other one was shorter and a little more to the point. Aside from this point, they were  both excited for a new story involving Abby and Tommy and loved listening to the new mystery. And of course, when Mr. Nut made an appearance they were very excited. No joke, they exclaimed, “Mr. Nut!” as soon as his face appeared on the pages.


I have to agree that of these two, I liked The Lost Recipe more because it was a little more exciting and to the point. However, it was not significantly better than The Mystery of the Lost Uniforms. And while there were little problems along the way (such as occasional redundancy) both books were a fun and exciting read. My twelve year old sister had even been found eavesdropping, and she said that she found it enjoyable to listen to.
But aside from just being a fun and exciting read, the kids felt like solving a mystery and eating healthier afterwards, which was a big theme in these books. Abby and Tommy are outside constantly when solving mysteries and getting involved in their communities, and they never forget to stop for a nutritious meal.
Overall, I found the book very fun both personally and for my siblings. But even more than that, I loved the messages that it shared. Kids are getting increasingly more lazy, and the promotion of being active is very important. Tommy and Abby are great role models and exciting to read about! So if you have a child around the ages of 4-12 and are looking for some good books, I would definitely recommend.

Hello, all! I'm McKenna, the founder of this beautiful blog, Book Believer. Here I will review (mostly) YA books, in hopes that I can help somebody find the perfect read. In the future, I hope to be an author. But as for now, I'm stuck in high school. ;)
Goodreads: McKenna Andrus
Instagram: book_believer